At last year's Sam Adams Longshot judging in San Francisco I met a young and energetic couple named Patrick and Rachel. Over the course of that weekend I learned they had driven up from Orange County, I believe they were picking up brewing equipment, and he told me he was working on opening a new brewery down there. In the midst of life swirling by I had forgotten about Patrick and his lovely wife, that is until I ran across them again in San Diego for the Craft Brewers Conference. Patrick looked a bit more intense down there than when I saw him last, but though his eyes were more focused he still couldn't wipe away the grin - I assume that must be his signature look.

Good news for the people of Orange County, Patrick has beer! The Bruery had at least one beer down in San Diego I got to try, and I appear to not have any notes on it, other than it was on the trade floor. In going through my notes, however, I figured I'd check them out online and see if there was any good information about the place and the beer. Turns out Patrick has a blog and he's got several posts of the process and several great pictures of the brewery - and a bunch of barrels! According to their blog, folks down south should start seeing his beers around town, at least in local bars.

By my understanding of that quote, this is right about the time you all in Southern California should be looking to find Bruery's beer. 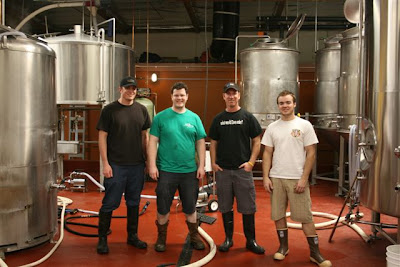 Here's a picture I borrowed from Patrick's blog, he's the one in the green shirt. That, my beer loving friends, is a happy group of brewers. We wish these guys all the best, in a county longing for better beer options, I can't imagine how they can't be a smashing success. Cheers guys!