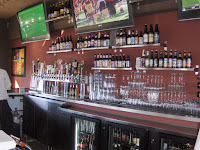 For dinner last night Tracy and I decided to see how things were going at Folsom's new beer haven, Manderes. We arrived to a place bustling with activity, with what appeared to be an office party, couples enjoying dinner and a bar full of regulars watching sports and drinking good beer. I was happy to see people here, on a random Thursday evening. I spoke with Brent, owner, and he said business was good. Sure, he had the off day, but this time of year you'd expect that from even the most established restaurants.

We knew the beer here was good, but what we weren't fully aware of was the food. On our first visit we shared a salad and a burger for lunch. While our first meal was good, it's pretty hard to really gauge a place on the quality of their burger. Last night's meal included the Beef Kabob's, served atop mashed potatoes, and Lobster Ravioli's served in a cream sauce. Both were excellent, satisfying meals, well beyond standard pub fare. The beef on the kabob was tender, cooked to order, and generous in portions - a great deal for under 15 dollars. Tracy's ravioli's were equally impressive. She was hesitant to order them, fearing they'd be bland and hard to enjoy. To her surprise they were bursting with flavors, savory and filling. Each meal came with a generous portion of salad with house-made dressing. I wouldn't normally mention a salad, by the way, but it really set the tone for the meal - fresh lettuce, a wonderful dressing... yeah, it was good.

In addition to the meals we enjoyed, Manderes offers aged steak, pork chops I've heard wonderful reports on, glazed and grilled chicken and beautiful salads and soups. The price ranges from 8 bucks (for a soup) to 25 bucks (surf-n-turf). Add to that a beer menu that is best in the region, and you've got yourself a hell of a dinner. And, as if this weren't enough, for dessert they offer a cheesecake, wrapped in a tortilla, fried, topped with ice cream, caramel and cinnamon. Yeah, it looked pretty freaking good.

As a side note, I was able to talk with one of Manderes' chefs, Earnest, last night. He was hired straight out of a major casino in Vegas. The guy's got a great personality, warm and friendly - very easy to talk to if he's not too busy. Talking with him and Brent, it sounds as if we can expect special menu items in the future, once they get a handle on the business side of things - including staffing, orders and all that fun stuff small business owners do on their own. Manderes also has a chef named Warren, who apparently has been on from the beginning. Brent feels lucky to have both, so much that he can't help but look like the cat that ate the canary, with a sheepish grin that only serves to prove his genuine appreciation for the work they do.

What to do Before Dinner in Folsom
If you're thinking about going to Manderes, but aren't from Folsom, there are a handful of great activities you can enjoy to work up an appetite.

Manderes | Folsom, Ca from Rick on Vimeo.
Posted by Rick Sellers at 9:00 AM