Pliny Gets a Label 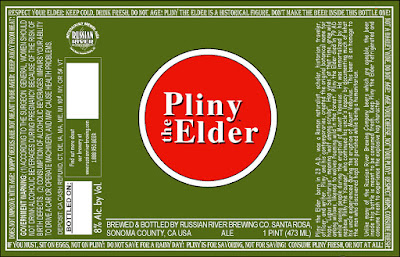 The Beer Advocates sniffed this out for me (well, they referred to the TTB site), a good group of guys they are. Sure, you get the impression some would trade their pets for a bottle of this beer, but you gotta love that enthusiasm. Right?

Heres what I sorta know - just don't quote me on anything too loud.

Vinnie didn't expect to brew a batch in the new brewery before March. Therefore, don't expect to see this beer bottled before late March - at the earliest. Of course, once it's bottled, that's only half the story. Last I talked with him (mid-December) they were about half-way through construction.

I DO NOT know where this beer is going to be distributed, won't claim to. I have heard rumors that bottles of Russian River beer will likely be headed to the greater Northern California region, out by Sacramento (the I-80 corridor). I suspect they'll likely add pallets to their San Diego runs. Will it also be in Philly? That seems likely, but I just wouldn't have a clue.

If I were a betting man, I'd say this would be about all Vinnie is set up to do right now. With all their talents, it's just hard work to build a new brewery, run an existing one, own a business in a new calendar year, have a life and think about all the people in the world who wants their beer.

Now, about that label. I hope you take a minute or two to read it - especially those who think every good beer needs to be laid down to get better. You'd almost get the impression that the guys at Russian River are worried about this happening, wouldn't you? Anyone else find the size of the bottle odd? 1 Pint?

All this does is remind me that I received a growler of this for my bday last week! Hmmm... that won't last long. Thanks Mike and Terri!
Posted by Rick Sellers at 12:08 AM