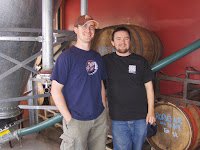 I love well crafted India pale ales (IPA), specifically those made in the relatively new American tradition, unfortunately I've been a bit neglectful in my IPA consumption of late. It wasn't a hard problem to fix.

Earlier in the week Tracy and I made it to BJ's in Roseville and found a beer I'm appreciating more and more, Alaskan IPA. This beer seems to embrace what is becoming a more popular flavor profile for the style, one that highlights the great flavors of hops - bursting in the aroma and taste - while restraining the bitterness that you'd expect from the style. Really, this beer was juicy, sweet - while finishing fairly dry - and generally showing off great flavor. It didn't take any convincing for me to order a second one to go with my meal.

Then last night we headed to Sacramento Brewing Company's Oasis, their restaurant and production brewery. We went SBC for the Brussels Blond, Peter Hoey's tank conditioned Belgian triple that is nearing it's end, but soon discovered he and Peter Salmond had crafted a truly remarkable IPA themselves. It's sad really, as the Brussels really does deserve a write up all its own (oh, how good it was with our grilled artichoke appetizer), but really, this night soon became all about the hops.

They've been tweaking with their IPA recipe for a while now, in fact a few months back they'd made one that I didn't think they'd top (it was so full of flavor, bitterness and goodness). Tonight's IPA stopped me in my tracks. To begin, they must have dry-hopped this to a point that nears obscene, the aroma seemingly dripping with the orange resinous powder you see on the cones - so good you found yourself telling the palate to relax, it would get its turn soon enough. I suppose the tongue only settled down the salivation because it knew the payoff would be worth the wait. It didn't disappoint. This was one of those beers that just grew in flavor as it ran across the tongue and down the throat, starting with subdued citrus and pine before moving into an assertive sassy mood, then just becoming down right aggressive, almost taunting the palate in some strange way. Just when you thought you'd experienced the beer in all its goodness there comes the after-burp that finds a way to only impress you further.

Don't misread the above sentences, there was certainly more than one dimension to the beer - with enough malted sweetness to satisfy throughout. Really though, to call this "balanced" would only be to say the malts introduced the hops for their hour-long performance. At the end of it all you can remember those malts were there, but the show belonged to the hops. Seriously, how often do you long for the opening act to play another set before the stars come on stage? Same deal here.

Am I gushing? Sorry, I did mention some hop deprivation earlier, right?

Point? Do I need one? Find a local brewery, go there, buy a pint and enjoy it. How's that work for you? Cheers!

Picture is of Peter Hoey, SBC's brewmaster, and me.
Posted by Rick Sellers at 11:56 PM