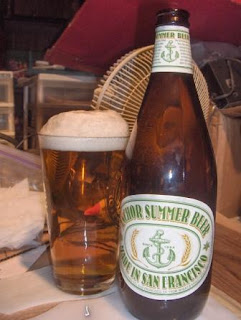 In this second installment of Summer Seasonal reviews for 2007 I have my first (to my knowledge) sample of Anchor's Summer Beer. According to the Anchor website, this seasonal beer was first brewed in 1984, but has only been bottled for the past five years (since 2002). It is available April through November in six packs and 22oz bottles, with this particular sample picked up at Beverages and More in Citrus Heights.

Apparently this is an American Wheat beer, and judging by the first year brewed, it must be one of the first to be made - no surprise knowing that Anchor has paved the way for several styles we love today.

When poured into a pint glass, this beer displays a dry, somewhat earthy and dried flower aroma. Very clean aroma too, slightly crisp and certainly inviting for hot summer nights. Its color is light golden with great clarity and a frothy white head that retains itself well for about 30 seconds after pouring.

The taste hits you in three distinct waves. Up front, the beer is biscuity sweet, with light caramelization. Next, the mild peppery and floral hop flavor and bitterness - for some reason I am thinking of dried flowers when tasted. Finally, this beer shows off a crisp, moderately dry finish and a wonderful tart character that is from the 50% wheat used in the recipe.

Anchor Summer Beer has a medium body with a chewy texture to it. Their site suggest a consistency of 'whipped eggs', but I am not getting that necessarily. The beer is also highly carbonated, lending to a more refreshing bite your cheeks will appreciate. Their is a low alcohol presence, which you'd expect in a beer boasting 4.6% ABV.

Overall, I gotta give some love for the quality of this beer, it is a great representation of the style. If you like Hefeweizens, beware. This is an American wheat through and through and you could be quite disappointed with every aspect of this beer if you're expecting the clove/banana character that defines Hefes. Additionally, the body and appearance would throw you off if you go into this expecting a cloudy beer. I personally find this to be very close to an American Pale Ale - but with a clear tart character.

About my scores...
I am scoring these beers based on their style, not a personal preference. I am not a fan of the American Wheat Beer, it should be noted. However, many people are, and this beer is clearly made to style and is pretty much without flaw. So, it gets a high score - and 3.9 is a very high score.