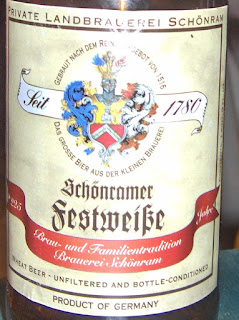 I'll admit, I've never heard of this beer and can't pretend to tell you the proper pronounciation. However, I know enough to not-so-boldly say this is a fantastic example of a Bavarian Wheat beer, otherwise known as Hefeweizen. Pouring an orangish gold color, with a cloudy haze and a frothy/rocky loose bubbled head, the beer is simply a thing of beauty to look at. The aroma also seems to carry out orders from the historical style guidelines - clove and and a beautifully light fruity character.

The flavor is slightly tart, as you come to expect from the style, with a sweetness up front that is surprisingly caramel-like. The hops in this beer are clearly not the forefront, only intended to buster the character of the yeast and malts. What hops you can detect come through as a moderately peppery and lightly bittering.

The mouthfeel is another strong area of this beer, as it is nearly chewy in it's texture. Low alcohol warmth and lending to the beers overall refreshing quality.

I won't say this is the best Hefe I have had, but it is everything you'd want in a traditional hefeweizen. Refreshing. Flavorful. Clean.

FYI - I picked this beer up at Nugget Market here in Northern California. I suspect you'll be able to find this beer and others by the same brewer. Suggest you look for these sooner than later. Judging by the date stamps, these are as fresh a beer you'll find from Germany.
Posted by Rick Sellers at 9:03 PM