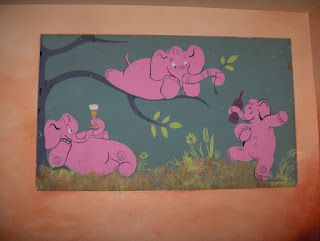 Update: 7/30 - I learned this from Wikipedia regarding "Pink Elephants"

Last night I made another trip out to the newish Concordia Ale House (I say 'newish' because in contrast with Horse Brass and other stellar locations these guys are the new kids on the block). If you haven't been to Concordia, know that there's always something good on tap and their bottle list is no sloucher. In addition, the food here is well priced for the quality of food; however, it isn't pub food so the prices reflect that.

While here I was able to track down the new owners of the place. Jerry Olson, along with his cousin, Jason Honstein, bought Concordia Spring of 2007. While still getting settled in it was pretty clear Jerry had ambitions for this place, and I'm looking forward to catching up with him next Summer to see where they've made it. For now though, know that the Double IPA competition is still in tact, albeit slightly modified. In 2006 the inaugural competition was blind - meaning you ordered beer by the number. Once completed you were tasked with the ranking of the beers and your votes were cast. Once the event concluded (which was scheduled for one week, but may have been cut short when the beer ran out) all votes were counted and winners announced. This year, however, the competition was 'open', allowing customers to know who brewed the Double IPA. Admittedly the format change raised some hackles, while also pleasing many who just need to know what they're drinking, but in the end the competition was met with open arms. Oh, sounds like next year they may be modifying this a bit to make it a competition between Washington and Oregon brewers - so keep an eye on that.

While enjoying an Alesmith Grand Cru with a couple of friends, one turns and asks me a geeky sorta trivia question, "What's with beer and pink elephants?" She asked because there was a picture on the wall (seen above) that seemed an awful lot like a couple of Belgian beers she'd seen in the cooler. I thought for a moment and realized I had nothing, no idea. I figured it'd be a good question for the owner... after all his wall is adorned with the lovable, fat, mythical creatures. I'll tell you now - nobody knows. If you do - email me!

The Pink Elephants on the wall, while still not knowing if there is any significance, did produce a great story and serves and the underlying motivation for this post. It turns out that Concordia Ale House is housed in a refurbished relic of a building. Prior to opening in 2006 the place was in shambles - leaky ceilings, falling apart at the seems. Then the property owner, no doubt prompted by the new upscale market next door, chose to redo the whole damed thing. Construction progress is well documented in a photo album behind the bar, including sevarl 'before' pictures... they did a lot of work making this a pretty place to be.

One day during this construction a worker made a discovery (I don't know exact details), the painting of the three pink elephants. You see, prior to being a dive bar and before the last owner took possession, there was a bar here called "The Pink Elephant, but rumors floating around with the old timers suggest Pink Elephant closed down in the late 1930's. So, from all logical estimations, this picture that was long neglected was most likely painted in the thirties. And that, dear beer enthusiasts, is a very cool story.

Look closer at the photo by clicking it. Check out the details here - or lack thereof. Then, think of the Disney Pink Elephant Parade from decades gone by - I see a lot of similarities. I don't know time lines for all this yet, but I figure I'll look into this and get back to you. For now, however, I am in the Portland airport awaiting my eventual boarding and my trip back home to Sacramento.

"Seeing pink elephants" is a euphemism for drunken hallucination caused by delirium tremens.

If you have any insight to provide, I'd love to hear from you - rick [at] pacificbrewnews.com
Posted by Rick Sellers at 6:31 PM