OBF Day Two - The Other Stuff 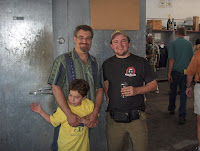 Pictured: Allen of Hair of the Dog and Rick
With barely enough sleep and weary capacities for thought and logic we left the Benson Hotel around 7:30AM for Edgefield to play a round of golf for the third annual Brewers ProAM charity event. All moneys for the event go to the Glen Hay Falconer Foundation, which uses this money to provide scholarships to brewers. At the event this year were two brewers now brewing professionally - both recipients of the scholarships. And, of course, being a 'brewers' golf tournament it was not a surprise that beer was involved - plenty of beer. In fact, kegs met us at nearly every one of the 15 holes played (they're undergoing construction now, 3 holes not available). The game was good, the contestants all having a great time and by the time it was over I had realized I was having a very good day.

From the golf tournament I headed over to Hair of the Dog brewing for a very special open house... very special. Allen, the owner/brewer, does not do tours and even if he did - it'd be nearly impossible to find. The beers, five on tap, were simply amazing and featured: Fred, Fred of the Wood, Rose, Greg, Blue Spot Double IPA. Greg is a beer using nearly 40% squash - hundreds of pounds worth. Incredible. Fred, as many know, is a beer named after Portland beer hero Fred Eckhardt - and it was an honor to klink glasses of this beer with the real Fred - all ajoy with the days festivities.

I can't really say enough about what I saw at HotD - but I'll just say this: what Allen has pieced together, with anything he can get his hands on, is simply a beauty to behold. A four barrel brewery and a one-man operation guarantee that Hair of the Dog's quality will not be an issue for some time to come. Fabulous.

As if this weren't enough, from the Morrison's place I rode with Jay to the Stumptown Coffee company in downtown Portland for the Elysian party, an invitation only event to host brewers, writers and industry supporters. There were four Elysian beers on tap, which were all great - the Jasmine IPA is wonderful! However, if you can imagine, my palate was becoming fatigued, so it was onto the Lambics they had behind the counter. I started with Liefmans Kriek and then finished with a Boone Gueze. The people, the place, the beers - all top notch!

When all was said and done I made the mistake of trying to get to another bar to watch a friend play. Don't get me wrong, he was great! I was just getting fatigued and needed to get back to my hotel. So, sadly, I bailed out a bit early (Sorry Jaycob) and hoofed it back to the Benson - capping off what is one of the cooler beer days I've had in a long time.

I love Portland.
Posted by Rick Sellers at 10:17 AM