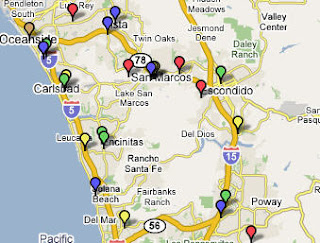 I don't have a lot of info, but a couple of pictures to show how close the fire is to some of our favorite brewers.

The first image is from BeerMapping.com. Along the 78, the red dots represent (from left to right) Green Flash, Lost Abbey and Stone Brewing. Take a look at the landmarks, I-15 and 78.

The second image is from local public radio station, KPBS', website. This shows the fire areas. Orange being where fires have been located, or where evacuations are in effect. Yellow is those places not in immediate danger, 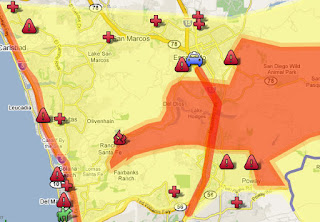 but certainly on pins and needles. It seems that the three breweries there in the Yellow are safe, and I know that Lost Abbey is not in harm's way (and more importantly, that the families there are safe).

Again, I'm not 'reporting' any breaking news, just passing on info I've found that you, as beer enthusiasts, may have interest in.
So, if you're out and about tonight, stop in and pick up a Green Flash or Stone produce (or both) and lift it with a fond thought for all those in the region impacted by the crazy fires.
Posted by Rick Sellers at 11:01 AM