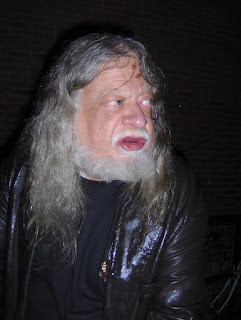 I grew up in the Northwest, spent my childhood in Oregon and went to college in Washington, so I am not afraid of the rain. In fact, so long as I am not bitterly cold, I quite enjoy spending some time out in a light rain - what we call a 'drizzle' in the great NW. Denver tonight was a wet, many said it was raining, but in all reality it was only a drizzle, but regardless, people in Denver sought shelter from the wet. So when I saw an American icon alone in the rain, I knew it was my chance to spend some quality one on one time with the one, and only, Don Younger, owner of Portland's famed Horse Brass pub.

"What are you drinking?" I asked. "Doesn't matter" was Don's reply (I never did find out what was in that pint glass). Don went on to share his personal phylosophy on beer and being a successful bar owner.

"People want to get back to their communities" was a phrase he'd stated more than a couple of times in our chat. I asked him to explain a bit more and words just weren't finding their way out of his mouth, so I prompted him with his own famous quote - "It's not about the beer, it's about the beer." At hearing this his eyes lit up and words no longer seemed to escape him. The conversation that followed was great, and I don't have a lot of quotes because of the setting and circumstance of it all, but I will do my best to convey his thoughts - I believe he is more insightful than you might think.

Getting back to your roots, that is what Don thinks makes a successful bar today (and for the past 30 years in his case). In my efforts to prod more information out, I realized for him it was more about people wanting to get away from the industrial aspect of everyday life. We tossed around examples of artisan breads, cheese, beer, chocolates and everything we see in our fine grocers around the country. With this in mind, it all began to make sense. It isn't about THE beer, it is about the BEER. What if Don didn't have the newest and greatest beer released by the hottest brewer in the region, would his bar suffer? Not likely. Because people go their to relax in an atmosphere that includes beer - good beer to be certain, but not necessarily THE beer.

Now, I feel like this isn't making a bunch of sense in writing, and I apologize if it is confusing - that would be my fault. What I think the point is, if I can distill this, is that Don thinks his success, along with the success of craft beer overall, is more about people appreciating things that are made by people with names we either know, or can know, and not corporations who produce at a scale that is so vast it simply cannot have a human eliment to it. When I think about it, I think the man is right.

I don't buy Velveeta (not even sure that's spelled right), or Wonder bread or Twinkies or even Snickers bars. I buy cheeses that are made by hand, bread from my local baker, deserts from a local grocer and chocolates that are made by hand. It is no wonder, therefore, that my beer selecion largely meets this criteria.

I imagine that to Don Younger the phrase "Support your local brewer" carries a lot more weight than it does on many of us who wear the t-shirts. I appreciate that, just as I appreciate all Don has done and continues to do - even if he tries to tell me he's not really doing anything.

Thanks Don for talking with me again, standing in the rain never felt better.

Side Note:
Writing this, I have a crazy longing for the Steak and Kidney pie served at Horse Brass, the best I've had - even though I won't claim t have had a lot.
Posted by Rick Sellers at 9:36 PM