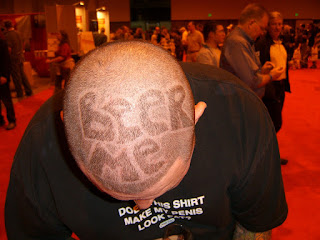 The Great American Beer Festival is on the downhill slide to completion, with the two final session occuring this afternoon and evening. I took the evening off last night, largely due to an actual pain in my neck that wasn't going to heal itself by standing in lines at Falling Rock or the Flying Dog parties, so I am feeling pretty darned good today - ready for some business in a glass.

Here, once again, is a quit hit list of various thoughts from GABF.
Well, I have places to go, so I'd better call this a post. Thanks to those I've met who have been very encouraging - Stan in particular. Oh, and thanks to Jay for a classy t-shirt, which I promise to wear with pride.
Posted by Rick Sellers at 7:46 AM