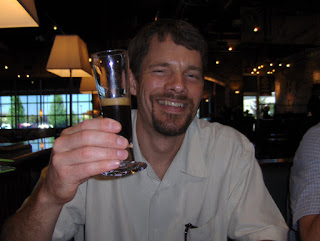 Alex Puchner, Senior VP for Brewing Operations for BJ's Brewhouse, was in town today for a scheduled meeting with local brewers. In advance of this he invited me out to sample the barrel aged beers they'll be sending off to the GABF and featuring in their inagural Brewers Dinner early next month. I've written before about my admiration of BJ's, the corporate brewery that hasn't lost their passion for beer, so I won't get into a lot of detail here. What I want to, however, is highlight what was a wonderful lunch break.

I arrived at the Roseville location shortly after the lunch rush was over and was quickly greeted by John Allegretto, Chief Supply Chain Officer for BJ's, David (Puffy) Mathis, Regional Brewing Manager for Northern California and Alex. After the obligatory greetings and small talk we quickly took our spots at an open booth and were served the current seasonal, Pook's Pilsner ("Pook" referring to Mr. Puchner). The pilsner was a perfect way to warm up the pallate, light, crisp and clean. While still finishing the sampler, Puffy excused himself to fetch two of the five beers we were there to sample.
Up First, the Jeremiah Red aged in Syrah barrels for eight months on Plums, then aged an additional four months in steel. This was a thing of beauty, with the oak and plum flavors subtly displaying themselves in the warmth of a moderate alcohol level. The balance of this beer was incredible and I am a bit sorry to say that most of you won't be finding this in your local BJ's 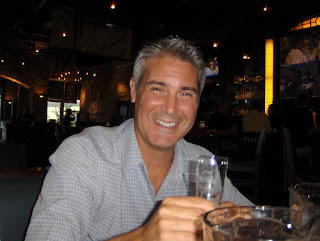 location. Puffy, man, this was a wonderful creation.

Beer number two was the Nutty Brewnette, fermented additionally with Brett, aged in Zin barrels for six months and then in steel for another six months. "Is it a Flanders?" Puffy was wondering aloud. Damn close. Sour from the get-go, this beer was a wonderfully refreshing example of a well-made Brett beer. Alex and Puffy felt the beer could have been better balanced, and I won't say they're wrong, but I loved the beer the way it was.

Up next was the Owen's IPA, which is an American IPA with oak additions, aged further in Zin barrels for six months - a fact that Owen may or may not appreciate (apparently Owen is passionate about his beer). Still hoppy after the six months in the barrel with significant bittering and a whole lot of Oak. In fact, the Oak here was almost overwhelming after a few sips. I do think this beer will do well in competition though because right up front the aggressive oaking is pleasant, to say the least. 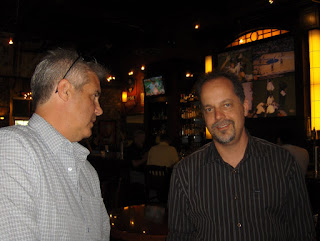 Then came the mother of all beers at this table, the Weizenator, a wheat monster. You may know by the "ator" suffix that this is a Bock of sorts - a weizenbock for those keeping score at home. "How much wheat is in here?" were the first words to fall out of my mouth, directed toward the beer's creator, Alex. He estimated the wheat to be about 55-60%, which was no shock at all. What was shocking? The age. "This beer was made six years ago" Puffy explains, "and I'd estimated it to be around 12% alcohol". Wow. The beer was certainly smooth, with a wheat-like tart character and a sweetness like candy, so upon further inspection I could easily understand the beers age. Yeah, this was my beer of the night...

Which may explain my less-than enthusiastic move to the final beer of the afternoon, a Blackberry Stout. While I appreciate the effort and the flavor, this simply didn't stand up to the Weizenator. Deep black with a rocky, stiff, brown head, the beer was a beautiful thing to behold. The aroma had clear berry character that balanced well the roasty character of the malt. No, there just wasn't anything wrong with this beer, but where's the pitcher of that Brett beer we sampled earlier? 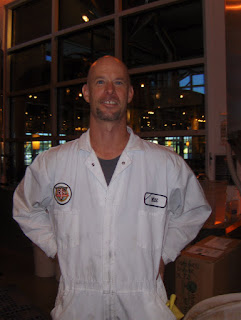 The afternoon was quickly escaping and John and Alex had a plane to catch, so it was time to go. Before heading out, however, Alex took me into the brewery to meet BJ's newest brewer, William (Will) Erickson. Will comes to BJ's with years of brewing experience, both at Mammoth Brewing in Mammoth California and Great Divide Brewing in Colorado. He wasn't around to hear it, but he's already earned some props in Puffy's mind, and I know everyone there is excited to see what Will can do. I, personally, look forward to sharing a few pints with the guy, he made a good first impression.

If your impression of BJ's is anything less than admirable, I hope my notes help correct that. As said in my previous story, you simply must sample their seasonal and one-off beers because this is where their brewers shine.

Thank you Alex, John and Puffy for a great afternoon.

Pictured (from Top to Bottom): Alex, John, John and Puffy, Will
Posted by Rick Sellers at 8:27 PM