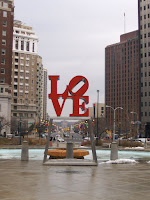 I won't go on too much about the great time I'm having here in Philadelphia, but do want to state that this town does indeed rock. Yesterday I started out by checking out the Independence Hall, the Liberty Bell and other historic icons of the city. Pretty incredible stuff really, worth the trip on its own. Of course, I'm here to discover beer, so after a few hours in history, it was time to move on to a few places.
A bit about Suzy... I left a business card at Khybers when I was there, apparently it wasn't long at all before she walked in and learned I'd been there. She called and left a voice mail, I left a voice mail and then the text messages began. Eventually we met up at Jose P's for a couple drinks where I learned a bit about her. She works for Sly Fox, a great regional brewer out here, as well as tending bar a couple nights week at Jose P's (I've mentioned how cool that place is), and also organizes/leads a lady's beer enthusiast club called IPA, or In Pursuit of Ale. As if this weren't enough, she also hosts the website www.beerlass.com. I don't know about you, but all that adds up to a pretty hard-core beer enthusiast.

Of course, just about everyone I've met along the way has been incredibly nice to me, sharing stories, beers and the occasional meal. I'm off to New York tomorrow, and there's clearly more happening than I'll ever get around to putting on the blog.

Pictures! If you'd like to see a bunch of pictures from Philly, click here.
Posted by Rick Sellers at 7:03 PM