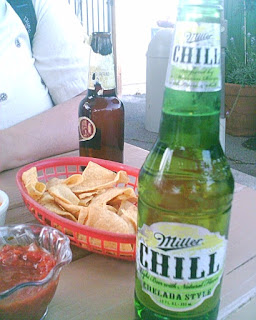 I went out to our favorite Mexican place tonight (one of our favorites, it should read) and ordered a Chile Verde Buritto that is a wonderful way to celebrate the Summer Solstice. After placing the order I was told I needed to try Miller Chill - "It has lime and salt". My wife laughed at the notion I'd pay the premium for the beer, which may have made me want to do it. I did it. "Sure, I'll take one" was my spontaneous reply. I debated getting a glass for the beer, but opted out figuring I was going to go all in on this tasting, drinking it the way the scientists/marketing gurus at Miller would want it sampled. It has been a while since drinking out of a bottle, felt weird.

Now, here's the deal. The beer isn't bad. It light in every way and I did pour a bit out to see what color it was (answer: yellow). The taste was what I think they wanted, Corona with lime. The lime was fairly subdued at first and the salt pretty much lost in the liquid. Again, not a bad beer. I don't have a lot more to say about the beers profile, but it should be noted that by the time my burrito showed up the beer's lime and salt came through more clearly - not sure if that was the temperature or the food bringing that out.

So, here's the zinger. This beer sucks. Why? Because it is supposed to. Calling this a good Mexican beer is the equivalent of calling Taco Bell good Mexican food. Sure, they go down easy and you can order both by the case with a good chance you'll finish, but why? Because they're cheap? No thank you. And no, I am not impressed that Miller found a way to put lime and salt in a light beer that otherwise has no character - no more than I believe adding lime and salt will make my six-pack of taco supremes taste better. Mexico puts out some fantastic beer, and sadly very few Americans seem to know. Some of the world's finest "Vienna-styled" lagers are produced there. Hell, one of the best Barley Wines I had this year was Cacupa's version that made it to the best of show round of Toronado's barley wine festival this year.

So what to do? If going on the brewers intention (brewer's intention... funny, more like if you believe what the focus group told the brewer) the beer definitely hit its mark. On top of that, I think this beer is going to be moderately successful for some time because of the way it is being marketed. When you compare it to Corona, it is comparable. I think they've misunderstood the appeal people have to actually putting in their own lime though, and eventually I suspect people would rather pick up the Corona sixers and a lime because that is what they're used to.

I don't know though, I just can't buy into the 'innovation' train the folks at Miller are on. I'd actually respect them more if they focused more on their flagship beers and didn't try to wow us with new packages and fun ingredients. So, with all this in mind, here's the score: 1.7/5

Yes, this is a harsh review. Again though, you can't convince me that Taco Bell is 'good' just because they have 'steak strips' in their otherwise crappy burritos.
Posted by Rick Sellers at 10:34 PM