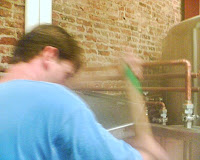 With their official 'soft' opening TODAY (6/21) I figure I better get something up here ASAP. Recently, Mike, Mark and Rick (along with spouses and friends) enjoyed a great evening at Northern California's newest brewery, Auburn Ale House. (see pictures)

First off, this place is beautiful with the tall and welcoming glass windows up front and the long friendly bar inside - not to mention the tables, booths and outdoor seating. We started at the bar, chatting it up with the barkeeps while enjoying the fine house-made beers they were pouring (all six). After trying each of the beers we were kindly seated (all 8 of us) at a large table next to the visible brewery. Following are some highlights.

The Beers:
There are three beers I could gush about, two of which are nearly perfect representations of their styles.

First is their IPA. I loved it. Big aroma, dark caramel color with a great initial sweetness that is greatly complimented by the assertive bitterness. Man I loved this beer.

Second is their American Wheat Beer. I admit, I don't care for the style in general, but this beer was exactly what a brewery needs - light in color, beautiful in aroma and full of flavor. This is a nearly perfect 'training-wheel' beer for those unfamiliar with crafted beer.

Finally, you simply need to sample the Oldtown Brown, perhaps the best brown ale I have had in years. Seriously. At less than 4% alcohol you will be greatly impressed at the wonderful aroma and taste, grainy and refreshing. This is just a fantastic thirst quenching ale for those looking for something with a bit less hops than a Pale Ale and I think you'll agree. If I were scoring beers to style tonight, this beer would win in a heartbeat.

The Food
As good as the beers were, we were equally impressed with the food - and with eight of us there we ordered quite a bit. Following are some highlights.
The Patio:
The outdoor seating at AAH is prime real estate in old Auburn, and for good reason. Under a mature tree and with a view of the historic building and grain silo, this place has an ambience that is among the best in the city. Additionally, the owners saw fit to put a service station behind the bar that is dedicated to the outdoor guests, meaning you don't have to worry about poor service when outdoors.

Overall, this place can't lose. Great ambience, wonderful food and beers that are unique and full of flavor. I give it a year before it gets listed as a top destination in the region for beer lovers - only half a step behind the great Rubicon in Sacramento. It is that good.
Posted by Rick Sellers at 11:48 PM