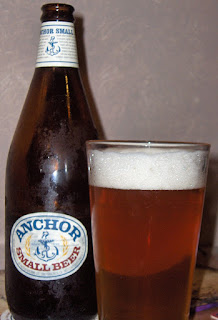 It has been way too long... way too long. I don't see this beer very often so when I was in Wine Country over the weekend and saw this in a local grocer I didn't hesitate in picking one up. Now I wish I'd bought more.

About 'Small Beer'
If you're not sure what Small Beer is, it isn't just a label name for Anchor's product, but an actual style of beer that goes back centuries. Essentially the beer is made from the second runnings of a brewers big barley wine. With most of the grains' sugar extracted in the first running there isn't a lot of sugar to make the second batch from the grist. This means the beer has a fairly low orginal gravity, resulting in an equally low alcoholic content. The beers are generally thinner in the body but with a great flavor for the smaller alcohol content. A wonderfully refreshing beer.

What About Anchor's Small Beer?
The beer pours a gold color and, because I had it chilled too low in my fridge, has a bit of a chill haze to it. Sure, I could let it warm a bit, but I just finished a workout and am finding this to be too much to let sit. The color has a bit of an orange hue to it as well. White bubbly head with moderate retention.

Aroma
Mild overall, which is no surprise. I'm going use a word that sounds obvious, but oddly appropriate - grainy. Very low hop character, but decidedly spicy. No alcohol noted.

Taste
The beer is just good, does that sound credible? No? OK, then I guess I'll expand a bit by using that grainy word again. If you've never tasted malted barley it may not make sense to you, but I find this to be pretty much a combination of 2-row and some lightly toasted caramel malt. This beer is not sweet, not bitter. The sweetness that is found is quite mild and shortlived, being overcome with a mild citrusy & spicy bitterness. It finishes a bit dry, with a lingering mild bitterness. A very refreshing beer.

Mouthfeel
A light bodid beer with moderate carbonation and no noted alcohol warming in the throat. Mild astringency, which I expect with the process this has gone through, and very easy to drink.

Overall
This isn't a sipping beer like the Old Foghorn is. Instead it is a near perfect summer beer when you're looking for liquid refreshment. If you think a great beer has to be big or imperial, Anchor will do what they can to let you know sometimes Small is great.