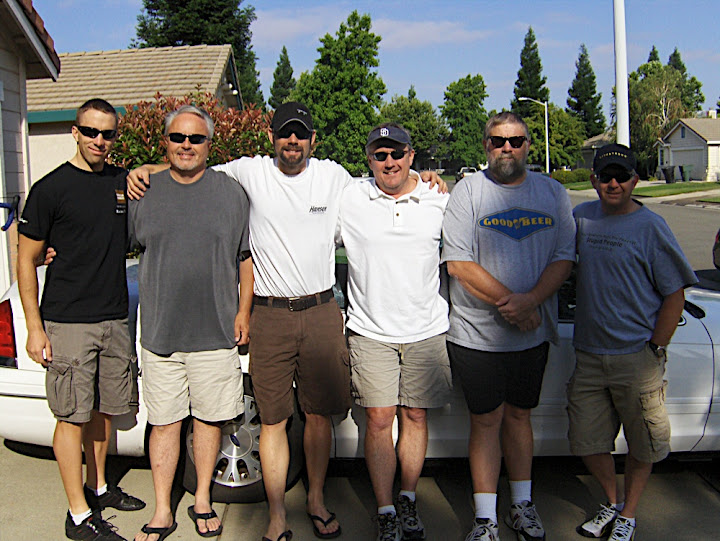 At approximately 9:30 AM, June 1, six friends began a journey they'll forever remember. While the event is many months in the making, I figured I'd share my story of the past couple of days: getting the guys to their first mile.

Dinner at the Sober's is always a treat, after all, Mike is a great cook and his beer-fridge always enticing. This night had the added bonus of friends and family: Zack and Oralia drove in from San Roman; James and Butch flew in from Colorado. The three men would accompany Mike and a couple others on this most epic journey in a couple days, but this night was about celebration and friendship - dressed up with a little hops. With dinner of lasagna we enjoyed some of the region's best IPAs: Beermann's unfiltered version was quite astonishing and the staples of Racer 5, Lagunitas and others made sure the night was a festive one.

Breakfast started plating just after 7:00 AM, French Toast with sausage cooked by the capable Butch. The meal was secondary though. From the time these guys woke up their mind was focused on one thing, loading up and moving out. The loading up isn't as simple as you'd expect - well, in some ways it is simpler, but to get to this level of simplicity took a lot of work. You see, these guys aren't packing more than they need to, only the essentials. For the one-week trek each man packed a small bag - most of the equipment and luggage fit nicely into one trunk.

The bikes were inspected, cleaned, oiled and inspected 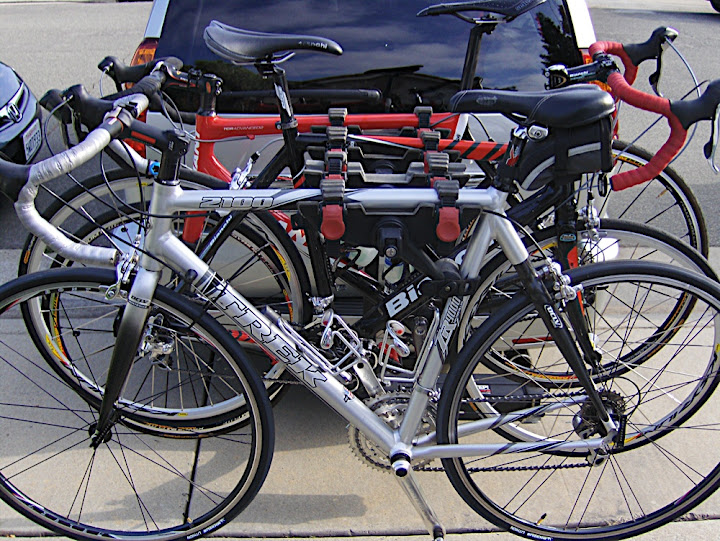 again. 25 years ago with this trip was taken Mike estimates his bike was about 20-pounds heavier, and less sexy. His newish lightweight steel-framed bike has a lot of miles on it, and his computer for the bike had just been repaired. The 'super' bike belongs to Zack, a CAT2 racer. I won't (can't/don't know) the details of this machine, but it's sleek, lightweight and damned fast. All the bikes on this trip were high-end, nothing you're going to find at your local department store.

When it was determined the bikes were ready and the luggage packed, the six bikes were loaded onto two car racks (three a piece). Two cars would carry the six, and I was an additional passenger with Carie (Darek's wife) and their child Tyler - we were needed to drive the vehicles back once the trip commenced.

The two cars departed right around nine in the morning. Not bad at all.

We drove north on I-5 for several hours before heading west on highway 299. For as uneventful as I-5 is, 299 is mind-boggling at times, stomach turning at others. A couple of hours of this highway and we were all ready for a stop in Blue Lake, specifically finding rest at Mad River Brewing Company.

I won't do a whole breakdown of the brewery tour, but I will say it was a much more interesting stop than I could have imagined it being. The story of their brewery I am certain will be talked about more here, soon.

After a couple beers and a quick tour we set out again, finding State Highway 101, crossing the Oregon border and reaching our destination for the day - Brookings, Oregon. I have been to Brookings on many occasions, find the views to be stunning and the climate appealing in its steely gray misty ways. Seriously, I love the Oregon coast and the weather there has never bothered me.

Dinner that night took place shortly after we unloaded into our rooms, pizza at Wild River Pizza and Brewing Company. This is the third WR location I've been to and was a bit disappointing in the unkept pizzeria feel it had - complete with a loud speaker with a tinny screaming voice that called your number when your pizza was ready. The food here, however, was perfect for what we were in search of. My personal favorite pizza had some sort of sausage and sauerkraut on it - it was so good!

Beers here are made at their other locations, either in Cave Junction (about 45 minutes away) or Grants Pass (about 1 1/4 hours away). The first two pitchers had were Pilsner and Brown Ale, both quite good in their own way, but not the beers we'd really hoped to find. On another trip to Oregon a couple of years ago, Mike and I stopped in the Grants Pass location and fell in love with their IPA - with an unassuming look and powerful flavors. There was no IPA on the board here and the barkeep said it wouldn't be on at all this night. Well, that was his story. I gave him some sob story about the trip we had just taken, the trip these men would begin in the morning and told him how much this crew loved their IPA. It wasn't hard, soon the barkeep (Shane) was in back, in the fridge, pouring IPA into a pitcher using a hand-pump (he was quite generously tipped for his effort, trust me). It was exactly what we wanted, a perfect end for the meal and a great way to start the trip. 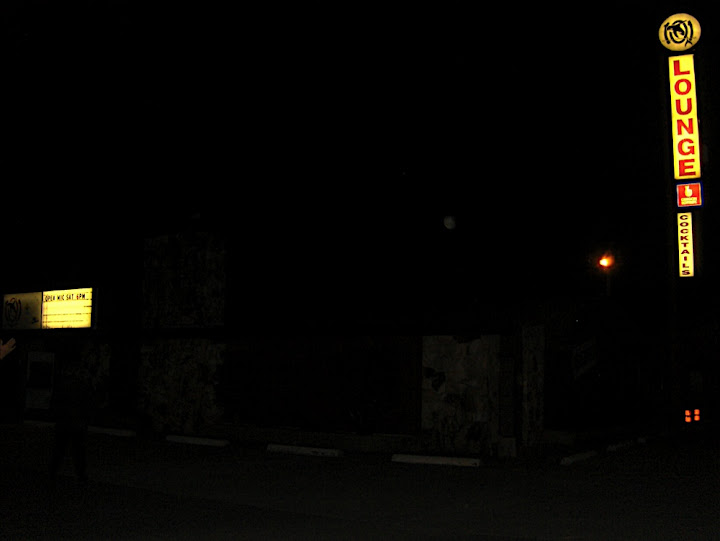 Back at the hotel the mood slipped back into a festive one. Soon the first growler of Auburn Alehouse IPA was opened, enjoyed and emptied. After this, the first growler of Alpine's Exponential Hopiness followed suit. As the beers flowed the decibels increased and soon we realized we were a bit too noisy for this small-town hotel, it was quickly decided a jaunt across the street to "Lounge" was necessary.

Before we figured out what had happened we were there, in a place that may or may not have had a real name to it, a place we only know as the lounge based on the sign outside. This was a hell-hole, smoky with a sort of desperate feel to it, accentuated by silent patrons dropping coins into a video lottery machine, clicking the magic button and watching as their money disappeared. They weren't a happy lot and we certainly changed the mood here in a quick hurry - I mean, how could we not?

The beer menu was not surprisingly shallow, and in order to fully appreciate it all I ordered a pint of Miller High Life, while others ordered Hamm's and Fosters - and the proof this night was only beginning, Red Bull and Jaegermeister. With our drinks in hand we found the pool tables and started into a debaucherous game of team billiards. The losers had to buy the next round, and the next round seemed to always be the Red Bull/Jaeger bombs (No, I never did drink one of these. I had one years ago and figured that was enough for this lifetime). I moved to Hamm's and soon it was apparent that we'd officially partied the night away. I wish I could say I liked the beers I had here, even if only for the 'feel' of it, but these were hardly drinkable. Yes, it was fun, and I'd do it ten times again with these guys, but...

Loaded and ready for bed we made our way out the front door for our short walk next door. We found an electric bike outside, marveled at it a bit, but soon lost interest. It really was time for some sleep.

At 7:00 AM I was quite happy with my shallow level of restraint the night before, I woke tired, but not hungover. In fact, for all the revelry, the gang seemed to wake up in one piece. We needed breakfast and soon found ourselves at another place with no name, enjoying small-kitchen fare of waffles, biscuits and gravy, omelets and coffee. Breakfast went quick and in short time we were again at the hotel.

The mood from the day before was gone, replaced with a sense of concentration and deliberation. Methodically, bags were again packed, stowed in the trailer that would be their home for the next week (towed by Bob, a great man who deserves mention). Cycling gear was donned and the bikes went through one last round of inspection as tires were inflated to perfection and route details were repeated. The guys had a long day ahead of them, they all knew it. 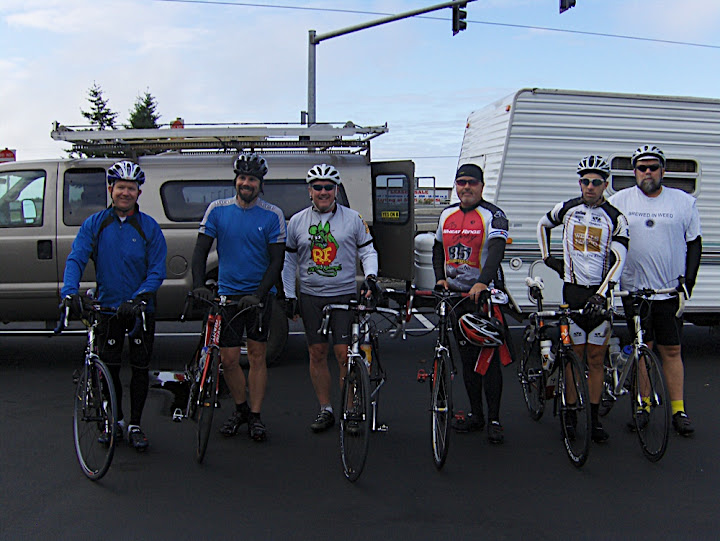 While several guys here were in great shape, there was an unspoken uncertainty about what lied before them all - high mountain climbs and a total of 80 miles plus - just for day one! Yes, they could do it, but what would the day be like? How would tomorrow feel? All words left unspoken as they mounted their bikes, gathered for a group photo and set off - beginning together, at Mile Zero. 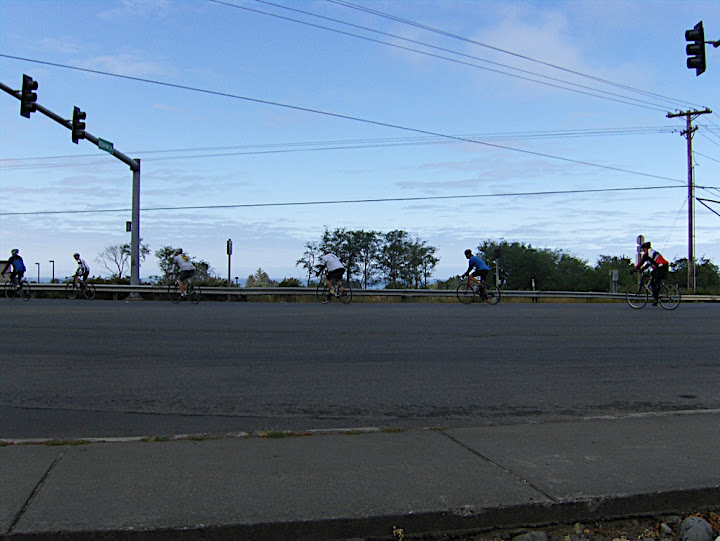