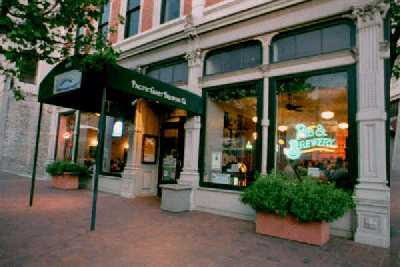 - Written by Mike Sober (AKA The Hop Hunter)

During the Holiday season I spent a few days in the East Bay area and had the opportunity to finally visit Pacific Coast Brewing in downtown Oakland. As is somewhat evident in the photo, the Brewery is housed in a historic Oakland building dating from 1876 that is partially furnished with artifacts obtained from the Oakland Museum.

Despite the fact that we were drawn to the site strictly as a beer destination I found myself studying my surroundings for several minutes before I even looked for the beer menu. The Bar itself looks to be well over 100 years old and was reportedly an original piece from someplace called the Cox Saloon from Old Town Oakland. When I finally got to the beer menu I found it to be pretty impressive in it's own right. The PC brewery offered seven of their own beers as well as no less than sixteen guest taps, including Harviestoun Ola Dubh Special 30 Reserve from Scotland. A treat I would save until just prior to last call.

The house offerings included a Pale Ale, a couple of IPA's as well as a killer (Killer Whale they call it) Stout, Holiday Belgian Double and a Barleywine. Our group of seven ordered a couple of full samplers and found the beers to be solid with perhaps a slight bit of sameness to them that I suspected was a result of the pale malt extract that brewer Don Gortemiller uses as a base in all his beers. I particularly enjoyed the Blue Whale Ale which drinks like an Imperial IPA and according to the menu won a Silver Medal at the GABF way back in 1989. I have to assume that to have been in the strong Ale category. The Gray Whale Pale Ale seemed to be the most popular house beer at the table as I noticed several were being ordered after the sampler was dissected and turned back into mere glassware .

The Guest Menu was where I found a couple of gems that I just couldn't resist at all. Luckily since we rode BART to downtown Oakland ... resisting was just not something I was concerning myself with at that time. I obviously didn't try them all but I did my best to dent the list.....

At 14% alcohol the Samichlaus is reportedly the strongest Lager in the world and I would like to say I got around to trying some....but that would be stretching the truth a bit much.

However, it wouldn't be expanding the truth at all to say I'm putting PCBCo on my list of return destinations for 2009.

Perhaps I should mention that they also have a pool table, Internet access and a couple of dart boards for entertainment. Dart boards that were in little danger of being worn out by us late in the evening. I learned that one should never combine Belgian Style Quads and darts after midnight. Nope...don't recommend it at all.

What I do whole-heartedly recommend is making the effort to visit and hoist a few pints at Pacific Coast Brewing in Oakland.

Check out Mike's blog at www.thehophunter.blogspot.com
Posted by soberment at 10:33 AM