NCHF: What More Can You Ask For?

This past weekend saw me attending the Northern California Homebrewers Festival, a gathering of homebrewers from across the region all toting along their homebrew and food items to share with each other. I don't know how many attend this event, but it isn't a huge attraction for beer enthusiasts. 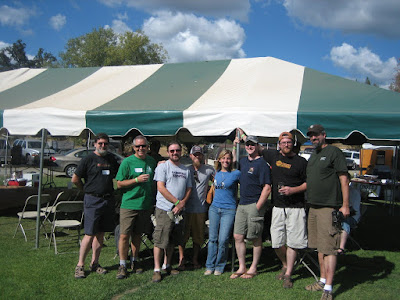 From left to right: Pete Slosberg, founder of Pete's Wicked Ales, Steve Wagner, President and Brewmaster at Stone Brewing, me, Matt Brynildson of Firestone Walker, JJ of The Thirsty Hopster, Pete of Sacramento Brewing, Peter Salmond of SBC's Oasis and Sean Paxton the Homebrew Chef. Photo courtesy of Peter Hoey.
There is way too much that happened over the weekend to fit into one post, so here are just a few quick hits.
Just a few random thoughts from a weekend I wish didn't end. A big thank you to those who make this event possible each year. This is an example of what a homebrew festival can be.
Posted by Rick Sellers at 5:05 PM