You ever been camping with people who really like to cook? My mom is one of these people and when she "camps" she usually brings along an array of cookware used to make wonderful breakfasts and dinners. I know others as well who pride themselves on camp cooking. Nothing, however, compares to what Sean Paxton pulls off.

You may have read about The Dinner elsewhere and already understand that the meals are elaborate, well thought-out and above all, delicious. What isn't talked about a whole lot is Paxton's "kitchen". To be frank, there isn't one. Instead Sean has a few outdoor burners, a nice smoker for meat and odd-and-ends put to good use. To state this mildly, it is not an optimal cooking environment. Still, year after year Paxton pulls off a meal that leaves nobody wishing there was just a bit more, no complaints are heard about the meal or the beer. 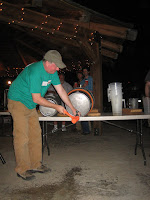 To that end, allow me to talk about the beer at the NCHF Dinner. I was fortunate enough to be able to talk to several brewers who contributed beer for the dinner this year (Shaun O'Sullivan of 21st Amendment, Peter Hoey of SacBrew and Matt Brynildson of Firestone Walker) and every one of these brewers were honored to have their beer poured at a Paxton dinner. By the way, this was not an easy event for Matt or Shaun to drive to - the commitment in the commute alone should impress anyone. OK, now perhaps I can talk about the beer...

Paxton spends a whole lot of time agonizing of the beers he is selecting for this meal and brewers are asked months in advance if a certain beer will be available. What's he looking for? Well, much like chefs on TV boast about their painstaking efforts of finding the best food at farmers markets, Paxton chooses only the best beers around. He isn't guessing either. He's tried the beers, knows the brewers and talks in advance with the brewers to make sure everyone is on the same page.

Additionally, what Sean does that is unique in his dinners is a prominent use of selected beers in every dish he serves. Again, this isn't an accidental step in his efforts, but a deliberate, thoughtful ingredient of choice. He wants the flavor of the beer to be detected in his dishes and for people to reevaluate the way they look at cooking with beer. To that end, Sean is successful. Already this week he's been asked for recipes for his dishes - recipes he's happy to share.

Perhaps the biggest key to his dinners' success is Sean Paxton, himself. This weekend was my third Paxton dinner and every meal, every dish, excites the audience not just because the appearance, taste and aroma, but because Paxton makes the dishes exciting. He'll walk you through the thought process of each dish and the beer pairing. He also invites contributors to talk about their beer (Hoey and Bryndilson articulated well the beers they brewed and why they worked so well with the dishes). This isn't a meal where you sit back and get served and walk away with only a full belly. Sean's enthusiasm drips on every word he utters, just as much as it drips off every bite taken. He isn't just a cook, he's more than a homebrewer - Sean Paxton is a true beer evangelist and time spent at his table only strengthens the diners' love of good beer and great food. If you haven't been to a dinner yet, keep an eye open for your shot - he gets around.

No, I didn't discuss the meal plate-by-plate. There was no need to I figured after reading posts by JJ at The Thirsty Hopster and Jesse at Beer and Nosh. You want to learn more about the dishes, that's all you'll need.

My beer of the night? Firestone Walker's unblended, unfiltered pale ale. All I know is I was still drinking this beer at 4:30AM with Sean, JJ and Matt.