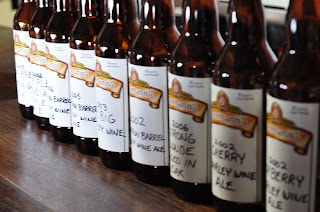 On Saturday, February 28, a truly outstanding beer event was put on by Beermann’s in Roseville. Years in the planning and now commemorating the exit of Beermann’s head brewer, Mike Sutherland, a lineup of aged barley wines and other big beers were put out for everyone’s enjoyment, some aged since 2002, and they were enjoyed by all. In some cases, previous brewers at Beermann’s who had moved on, came back to enjoy barley wines that were brewed before they left such as with Brian Ford, now with the Auburn Alehouse.

Beermann’s is a small brewery that opens on Thursday and Friday afternoons for informal happy hours. The atmosphere is casual and often feels like you’re enjoying beer over at someone’s house. Saturday was no exception.

Where to start? Where we started was with the 2002 barley wines made with fruit. The first was brewed with raspberries. What was most surprising about this beer was that after 7 years, the aroma still had a noticeable smell of the berries. There was also tartness still present in the flavor and I thought I picked up some sherry character as well. This was a great beer and started the adventure off right

Up second was what turned out to be my favorite of a bunch of truly great beers. The 2002 Bourbon Barrel barley wine was brewed with cherries. The fruit provided some sourness and dryness to the beer but the malt provided great balance. While the cherries and barrel aging provided a great flavor, the lack of sweetness was unique to this offering. I found later that I was comparing the other beers I tried to this as my gold medal.

Following the 2002, we moved to the 2003 Strong Blonde aged in oak. This beer was dominated by the oak aging in both aroma and flavor. It was thinner than most of the others with noticeable alcohol but I enjoyed the variety, and in fact liked this beer quite a lot.

In order to be able to remain standing at the end, I chose to skip their 1000th brew, a double IPA, and their 2004 triple IPA. According to others I talked to, the Triple was outstanding but the double was still young (brewed a couple of months ago).

We then moved on to the 2006 version of their Bourbon Barrel Barley wine. This beer had a noticeable sweetness to it with some notes of vanilla from the bourbon barrels and a possibility of hazelnuts. A very good version of their barley wine,

After the 2006 Bourbon Barrel, we had the 2005 version. Heavier, with more vanilla from the barrels than the 2006, I preferred this version. There was a slight citrus note as well. Not a beer to drink several of but an outstanding barley wine!

Next up was the 2004 barley wine, Mr. Big. The version was never put into wood barrels and as a result, didn’t have the vanilla notes and wasn’t as sweet as the other two. Roasted malt was more noticeable in this version as well. This was another great example, especially for those who favor un-oaked barley wines.

We soldiered on and moved to the 2002 Bourbon Barrel Barley Wine. This beer was proof that the right beer can be aged for multiple years. Right up there in enjoyment with cherry version, this beer was more subdued than the others but still complex, as a good barley wine should be. Still sweet but more caramel-like than vanilla, this beer was exceptional.

This was great event enjoyed by all and well worth the $30 entry. People truly enjoy a lot of small breweries around the states and events like this are why. Rumors have it that Beermann’s is being sold. Here’s hoping the new owners keep up the good work done by Mike and his staff.
Posted by JBarb1226 at 12:06 PM