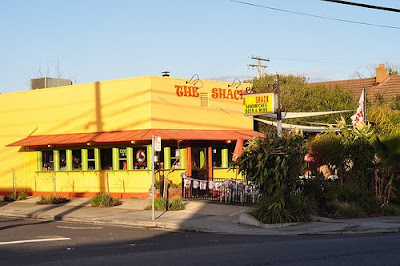 Typically traveling the freeways of Sacramento during weekday rush hours is a slow and painful proposition and last Thursday was certainly no exception. So naturally I did what any responsible beer enthusiast would do in that situation.....I found a good watering hole and waited out the gridlock.
Following a marvelous text tip from PBN founder and good buddy Rick my lucky destination turned out the be THE SHACK; which is located at 5201 Folsom Blvd in a vintage area of Sacramento just East of where the Business 80 and Highway 50 cross. According to Owner/Beer host Gary Sleppy this 193o's era building is the second oldest continuously running restaurant in all of Sacramento. Despite the somewhat garish Reggae inspired motif I immediately felt comfortable and at home in what is obviously a very popular destination for the local inhabitants.
The Shack's menu offerings includes the usual solid pub comfort food as well as gourmet dinner offerings that range from Rib eye steak to mussels, squash Ravioli, several salads and a very interesting and popular dish called Porky Pear. A sage and bacon wrapped pork w/Asian Pear pan sauce.
But of course it is the beer selection that impressed me most about the place....that along with Owner Gary's infectious enthusiasm, obvious beer appreciation and overall knowledge of his extensive inventory.
The Shack has 8 tap handles for draft beer and a walk in 'beer fridge' full of dozens of other styles from across the beer spectrum. The taps included...
Speakeasy Prohibition
Rubicon Brewing IPA
Oskar Blues Gordon
Grimergen Belgian Abbey
Green Flash West Coast IPA
Sudwerks Pilsner
Pabst Blue Ribbon
The bottle selection is far to extensive to list here..but some of the notables for me were
Russian River Pliny The Elder
Lagunitas Hop Stoopid
North Coast Brewing Old Rasputin
Alaskan Brewing Smoked Porter
Fire Stone Walker Union Jack IPA
Sierra Nevada Brewing Torpedo and Celebration
As well as the huge list of Belgians, German Hefeweisens, Doppelbocks and Octoberfests.
By the time I decided I'd better go check on the traffic situation and make my way home there was no more traffic....or sunlight left in the day.
I soon realized I'd spent over three hours on that bar stool, trading beers with Gary, talking to at least a dozen friendly patrons and enjoying the beer board above the entrance to the bustling kitchen area.
To say I recommend a visit to The Shack would be a gross understatement...I personally can't wait to take my wife Terri for a visit to soak up some local Sacramento neighborhood hospitality and suffer the beauty that is trying to figure out which beer I want next.
Of course.... like a lot of The Shacks customers......I could always just ask Gary.....he's sure to have some helpful recommendations.