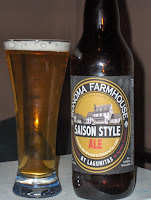 I was recently in Sonoma for a wedding, and as I always do I went in to some beer shops to see what the local brewers were putting out. I had heard of the Lagunitas "Sonoma Farmhouse" label, with Hop Stoopid gaining much attention in 2007; however, I had not found the products in the Sacramento region, largely due to the line's very limited distribution to date. I have heard rumors about distribution for the line expanding in the near future, but rumors are just those.

I am going to start my review from the end here, I hope you don't mind. Overall, this is a fantastic beer, brewed to style and highly drinkable. This beer is certainly worth the purchase price - although with the delicate nature of the style, I am not sure how far I'd ship it in the heat of summer.

Appearance: Light golden color, with some orange highligts found at the deeper top half of my fluted glass, with brilliant clarity. Rocky white head with good retention, head being dry and easy to build up over the rim of the glass. Yeah, this beer pours beautifully.

Aroma: While not aggressive in any way, the beer is full of aroma. Most notably are slight citrus notes, but unlike the grapefruit found in American hops, this beer displays hints of fresh lemon zest. There is also a bit of spice here as well, similar to black pepper. Clearly a beer made with European hop varieties.

Taste: Candy sweet initially, but not at all cloying. There is also a part of my brain that suggests a breaded biscuit too. Quickly after this initial sweetness is a moderate spicy hop bittering, which balances the beer wonderfully. The beer has a wonderful dry finish with a lingering mild bitterness.

Mouthfeel: The beers medium body, 5.2% alcohol rating and gentle carbonation make this highly drinkable. I admit too, I am a bit surprised this beer is 'only' 5.2% ABV, I suspected a beer of this body and flavor to push the 7% mark.

Food Pairing Suggestions? My initial thought was leaning toward grilled chicken or poached fish, each with a light spicy seasoning. However, when considering the beers powerful flavor, effervesent qualities and slight spice character, I think of a well made crispy duck breast with a slightly higher than average fat content. Additionally, I can easily imagine this with a pasta dish featuring a creamy white sauce, italian spiced sausage and fresh herbs. I think with both dishes you'll find this beer highly refreshing and palate cleansing.

I don't know what the immediate plans for this Sonoma Farmhouse project are, but I hope Lagunitas continues to explore some of these beers made with a great respect for tradition, and creativity.